Kümmel (caraway spirit) used to be the most wanted spirit in the land between the seas – Schleswig-Holstein – a fact which was forgotten for many years.

Considering that the German duchy of Schleswig-Holstein belonged to the Kingdom of Denmark until 1864 it is not surprising that today the preference for the drink (which is similar to Aquavit) is still there.

Since 1898 Kümmel is produced in the Oldesloer distillery. In 1983 it was launched with a new design under the name Oldesloer Kümmel. Since then we have an ever-growing user group.

Today Oldesloer Kümmel is one of the most popular caraway specialties in northern Germany.

The clear specialty from Schleswig-Holstein owes its typical flavour to valuable distillates made from the finest caraway seeds – the oldest spice in Europe.

The serving temperature should be about 5-7 ° C. 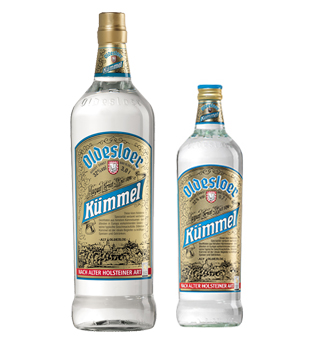