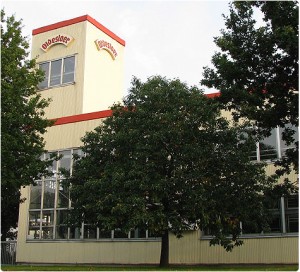 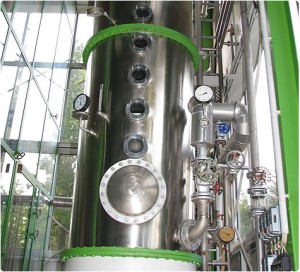 The production of Korn and Double-Korn

Legally, Korn Schnapps may only be made out of rye, wheat, barley, oats or buckwheat using the entire grain kernel. The production of Korn may only occur in the regions of the EG, where German is an official language and where this drink is traditionally produced.

The production of the Korn runs roughly as follows:

The grain is ground to a fine wet shredded mash. The resulting mash will be mixed with about 3-4 times the amount of water. Then malt will be added and the mix heated to approximately 75 – 80 ° C. After that it will be cooled and treated with yeast.

The starch contained in the grain will be split during two phases into malt or glucose by addition of malt or enzymes. This is necessary as the yeast is not able to convert starch directly to alcohol.

Through the added yeast the existing sugar is fermented into alcohol and CO2 (carbon dioxide). This process is finished after three days.

The alcohol contained in the mash will be gained by distillation. This process is called raw distillate.

The result is the so-called middle course which has a distinctive, delicate, full and pleasant smelling  Korn aroma. The alcoholic strength of the middle course is between 96.8 – 97 % vol. This high percentage middle course is called fine distillate. A further production step is the blending of different varieties including brandy with water to drinking strength. For Korn it is 32 % vol. and for double Korn it is 38 %. The connoisseur drinks these classics at a temperature of 0-7 ° C.

It is not advisable to put Korn Schnapps or double Korn Schnapps into the freezer because in this case you cannot feel the delicate Korn flavour any longer and no longer have the actual enjoyment.